True to Form, the March Exhibit at Justus Fine Art Gallery will feature an exhibition of work by Donnie Copeland, Robert Fogel, Robyn Horn, Sandra Sell, and Gene Sparling. Working in a variety of materials from wood and steel to paintings, the featured artists in the exhibit create forms that transcend their materials and engage viewers. Donnie Copeland’s painted paper striations on canvas and Robert Fogels steel pieces are suggestive of geologic and natural formations, while also maintaining their non-representational mystery. Robyn Horn’s sculptures and paintings balance elegant design with the organic. Sandra Sell utilizes sketches as part of the process from which she develops the forms echoed in her sculptures. Gene Sparling’s vessels reveal the natural beauty and design of the wood, while also standing strong sculpturally. True to Form will open with a reception from 5-9 p.m. on Friday, March 3, in conjunction with the monthly Gallery Walk in downtown Hot Springs. The exhibit will be on display March 3 – 31, 2017.
Donnie Copeland works primarily with painted paper to produce non-objective, collaged canvases that emphasize pattern, texture, color and mark. His works are a synthesis of the visuality of landscapes, such as the planted fields and prairie that run along the Mississippi and Arkansas rivers, as well as that of peoples and cultures local and distant, rural and urban. Copeland’s paintings were featured in a solo exhibit entitled Interrupted Paths (2015) at the Aughinbaugh Gallery of Messiah College in Mechanicsburg, Pennsylvania. His work is also included in Abstract AR(t) (2016) at the Alexandre Hogue Gallery at the University of Tulsa in Tulsa, Oklahoma. In 2012, Copeland’s work was part of Boundary Hunters, an exhibit featuring seven contemporary painters at Alfred University’s Fosdick Nelson Gallery in Alfred, New York. He earned a BA in Studio arts from Ouachita Baptist University and then continued his education at the University of Dallas where he obtained a MFA in painting. Copeland currently serves as Associate Professor of Visual Arts and Chair of the Department of Visual Arts at Ouachita Baptist University where he teaches painting, drawing, and art history. 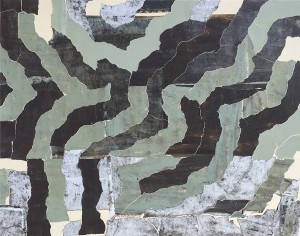 “Bent curvilinear bands are painted on paper and then affixed to the canvas which in turn serves as a platform for the abstractions. There is a definitive point of distinction between the paper, paint and canvas. Copeland’s paintings suggest cross-sections of ambiguous natural forms or… geological structures and sedimentary materials. Through his investigation of charcoal, acrylic and paper, Copeland’s lyrical strata emerge as both rich and detached. The worked-over surface of the collage elements contradicts the austerity of the pristine canvases.” – Eric Sutphin, Boundary Hunters: Four Parts to Every Story. Exhibit Catalog, 2012.
As a biology professor for 25 years prior to pursuing a career in art, Robert Fogel developed a deep appreciation for nature, especially landforms and rocks that exhibit strong lines, textures and color. Many of his sculptures evoke rock formations, landforms and other natural features that he observed during the summers he spent collecting fungi in the West.  Working in metal, many of Fogel’s works employ metal boxes welded or bolted together. The size and shapes of the component boxes suggest different features, e.g., in the ”Vug” series large boxes evoke the mother rock and small boxes a mineral vein. The black oxide coating on steel may be left intact or altered to various degrees by grinding, sanding, sandblasting, or hammering. Fogel further alters the surface by applying patinas, stains or paint and sealants. Upon moving to Louisiana, Fogel became intrigued by the meandering streams and the oxbow lakes and bayous created where streams have changed course. By offsetting sections of the ”Meander” sculptures, he breaks up the flat surface adding interest. The offsets also reference the geologic, political, and developmental forces acting on the rivers in the region. 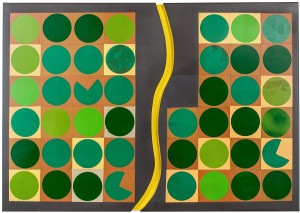 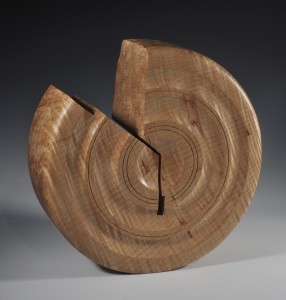 “I am drawn to abstract, geometric sculpture, the volume of it, the form, the textures, the negative spaces. I am obsessed with tension and movement, the gestural qualities of sculpture. I believe that the individual character of the material can be preserved by the inspiration of the artist, that they can both exist by the combining of the curving lines of nature, together with the angular lines of geometry, resulting in a gentle merging of the two entities, one working with the other in a union of souls. I am influenced by the nature of the material and its resistance to being changed. I think in terms of wood and stone, of the things of which nature is made, of the ease with which nature develops into shapes and forms, created throughout centuries of accumulated time. I persist in seeing sculpture in a purely visceral way, line and mass, the interplay of angles and planes to create effects of light and shadow, with a strong emphasis on visual grace, and a sense of structural strength and unity.” – Robyn Horn
After completing a career in the military, Sandra Sell relocated to Arkansas where she pursued her artistic education earning a B.A. and M.A. in Studio Art from the University of Arkansas at Little Rock. In continuing her development as an artist, Sell also served as studio assistant for Stoney Lamar and Brent Skidmore at the Pendland School of Craft in Pendland, N.C. and as an apprentice to artist Robyn Horn in Little Rock, AR. Since 2007, Sell’s work has been included in 30 exhibits in the U.S. Recent exhibitions include: Materials: Hard + Soft International Contemporary Craft Competition and Exhibition (2017), Greater Denton Arts Council, Denton, TX;  Curiosity Revealed (2016), Thea Foundation, North Little Rock, AR; Merging Form and Surface (2016), Pulaski Technical College Center for Humanities and Arts, North Little Rock, AR; Longevity (2015), Arkansas Capital Corporation Group, Little Rock, AR; Solo Show (2015), River Valley Arts Center, Russellville, AR; Edges & Lines, National Juried Exhibition (2015), Fredericksburg Center for the Creative Arts, Fredericksburg, VA; Annual Juried Art National Exhibition (2015), South Arkansas Arts Center (SAAC), El Dorado, AR; The Penland Experience (2015), University of Arkansas at Little Rock, AR; Small Works (2015), The National Association of Women Artists, Inc. (NAWA), New York, NY; Salvage: Reclaiming Recycling (2009), National Juried Exhibition, The Phillips Museum of Art, Franklin and Marshall College, Lancaster, PA; and others. Sell’s work is also included in the permanent collections of the Arkansas Arts Center, the University of Arkansas in Little Rock, and the Historic Arkansas Museum, along with many private collections. 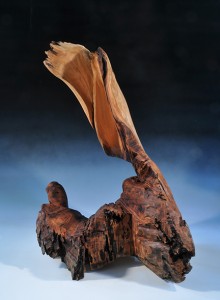 “My artistic intent is the development of an idea, a thought, or perception of my emotional response, into objects. The act of sketching reveals the physical form, then materials are selected as a vehicle to convey my intent. . .Creating is a means of expression, and when in process, nothing else matters. Whether I am cultivating a metaphor for life experiences or expressing an emotional response, I am observing constantly and pushing for new growth.” – Sandra Sell 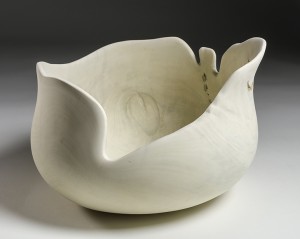 With great concern for remaining wild places, Gene Sparling has served as a voice for wildlife and habitat conservation throughout the country. It is no wonder that when Sparling began his career as an artist, that his medium would be tied to the natural world. He began learning to work with wood as a child, from his father, and has continued learning and working with wood, throughout his life. Through his work, Sparling seeks to highlight the unique beauty of each piece, while creating vessels, sculptures, and furniture that complement their natural roots. Sparling began pursuing his artistic vision in wood in 2008 and by 2011 was receiving notoriety for his elegant wood pieces. Sparling’s work was selected for inclusion in Crystal Bridges Museum of American Art’s museum store offerings of original work by contemporary artists, as well as the Historic Arkansas Museum, Little Rock, Arkansas, The Arkansas Craft Guild and The Ozark Folk Center, in Mountain View Arkansas. His work was recently included in the international sculpture exhibit, Materials: Hard + Soft International Contemporary Craft Competition and Exhibition (2017), Greater Denton Arts Council, Denton, TX.