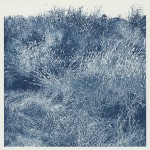 The September exhibit at Justus Fine Art Gallery will feature a selection of photography by Beverly Buys, Don House, Carey Roberson, Sabine Schmidt, and Robbie Brindley. The show will open with a reception from 5-9 p.m. on Friday, September 6, in conjunction with the monthly Gallery Walk in downtown Hot Springs. The exhibit will be on display September 6-30, 2019.
New work from Beverly Buys’ Delta in Blue series will be featured in the photography exhibit. The cyanotype prints are made using the sun to print onto archival paper with handpainted emulsion. Each print is an original due to the organic nature of the process, even when the negative is used for another print. Buys earned a M.F.A. in Photography/Printmaking from the University of Memphis and served as Professor of Photography in the Ellis College of Arts and Sciences at Henderson State University prior to retiring in 2014. Her photographs have been featured in numerous solo and group exhibits throughout the South.
“The delta region of Arkansas has captured my imagination with its history and harsh beauty. Not an easy place to live, it is nevertheless rich in soul altering ways. Musicians Johnny Cash, BB King and Levon Helm are a few of many whose music resonates with the longing of living in the Arkansas Delta region. Writers and artists are moved and inspired by the region and I am a part of that tradition. The abundant natural world, the wide Mississippi River and the difficult, often tragic, history sifts and settles into a rich gumbo of nostalgia, inspiration and longing just as the large rivers emptying into the mighty Mississippi leave their deposits of deep, black soil that is the basis of its economy. Hardship grows hope, strength and ingenuity and that is what my photographs are about.” – Beverly Buys
A selection of Don House’s series of images that involve water, swimming holes, rivers, and people experiencing those places, will be included in the September show. The traditional darkroom silver-gelatin photographic prints provide a rich medium for  showcasing House’s depth in capturing his subject matter. House’s photography has been included in numerous solo and group exhibitions throughout the country, along with a wide range of publications. His work has been featured in: Boy’s Life, Persimmon Hill, The Wall Street Journal, American Forests, First Freedom, Free Hunters, Outdoor Oklahoma, Wood, Traditional Bowhunter, Backpacker Magazine, and Woman’s World, along with a variety of university text books, and covers for fiction and non- fiction books. Two collections of his work - Buffalo Creek Chronicles, and Not a Good Sign (December 2009) have been published by Phoenix International Press.
“If I were to inventory the images from fifty years of photographing, the largest portion would start with the key word river. Since calling Arkansas home thirty-five years ago, if I’m not in studio, I am on a river – The White, The Buffalo, The Mulberry, Lee Creek, The Kings, War Eagle. Rivers are places of magic and have affected the way I photograph, how I view the world. It is more than the sound of water, more than overused metaphors of movement and passage, they are places where children go feral and adults get lost for their own good, places of significant rejuvenation.” – Don House
Carey W. Roberson’s mixed media photographs will also be showcased in the September photography exhibit. Roberson earned a M.F.A. from Louisiana Tech University and currently works as an Associate Professor of Art at the Rosemary Adams Department of Visual Art at Ouachita Baptist University. Roberson has exhibited in over 70 competitive, invitational, and solo exhibitions. His work has been exhibited at the University of North Texas, Ithaca College, Huntsville Museum of Art, Mobile Museum of Art, the Arkansas Arts Center, and many other university and private galleries around the nation. He is a winner of the Arkansas Arts Council Individual Fellowship Award and has works in a number of collections, including the Mobile Museum of Art in Mobile, AL. His artwork has also been featured in the national publications of New American Paintings and CMYK Magazine.
Color photography from award-winning photographer, writer, and translator Sabine Schmidt will continue the sense of place that is echoed in the many of the selections for the exhibit. Originally from Germany, she lived in London, Memphis, and New York before moving to Fayetteville, Arkansas. She has translated books by Wynton Marsalis and Henry Chancellor and translates regularly for the German editions of National Geographic and National Geographic Traveler. Her writing and photography have appeared in American and German publications, including Arkansas Life, Whitefish Review, L.A. Times Online, Audi Magazine, and Rolling Stone Germany. Schmidt is included in the 2019-2020 Registry of the Arkansas State Committee of the National Museum of Women in the Arts and is listed with the Arkansas Arts Council Artist Registry. Schmidt won a 2018 Art in Its Natural State commission award for her installation (In)Visible House from the Winthrop Rockefeller Institute and an Individual Artist Fellowship from the Arkansas Arts Council for 2018-2019. She was named one of Ten Artistic People to Watch in 2016 by the Northwest Arkansas Democrat-Gazette. Schmidt is a founding member of the artists cooperative Fenix Fayetteville.
Robbie Brindley is a native of Hot Springs and focuses his work as a photographer on the things he finds romantic and unique about the place he’s from. The things that make it home to him.
“I go out alone and drive; It’s a form of meditation. I’m drawn to the quietness of the Delta and its lonely roads and forgotten places. Things in a place where a simple way of life seems to be forgotten, or at the least, admired. I romanticize the cicadas and humidity. I adore the dust in my mouth while thunderstorms roll in on the hottest summer day. My work is a slow process. Sometimes driving all day over many miles of backroads and dirt paths, passing small towns and empty fields, forms of kudzu and abandoned structures, to take one picture.” – Robbie Brindley