The April exhibit at Justus Fine Art Gallery will feature work by contemporary representational painters Jason Sacran and John P. Lasater IV. Both are Arkansas artists who have traveled throughout the United States teaching workshops and participating in numerous plein air painting invitationals, while also garnering top awards in a variety of notable exhibitions. The work included in the April show combines a selection of the artists’ plein air paintings, along with studio work. Brotherhood will open with a reception from 5-9 p.m. on Friday, April 7, in conjunction with the monthly Gallery Walk in downtown Hot Springs. The artists will be present at a closing reception on Friday, April 28 from 4-6 p.m. and will participating in a still life demonstration on Saturday, April 29 from 10 a.m. – Noon. The exhibit will be on display April 7-30, 2017.

Sacran and Lasater both paint what catches their interest in the moment and are often drawn to capture overlooked and familiar aspects of everyday scenes. Their work reflects responses to patterns of light and shadows, a mood or atmosphere, an orchestration of shapes, color contrasts, or even curiosity about a new subject. A profound gratitude for life unifies the work.

Owned by artist Dolores Justus, Justus Fine Art Gallery offers a wide range of original art including sculpture, paintings, ceramics, photography, and more by recognized artists. Opening receptions are held in conjunction with the Hot Springs Gallery Walk held from 5-9 p.m. the first Friday of every month in downtown Hot Springs. Hours are 10 a.m. – 5 p.m., Wednesday through Saturday or by appointment. Justus Fine Art Gallery is located at 827 A Central Avenue in Hot Springs, AR. For more information, call 501-321-2335 or visit online at justusfineart.com. 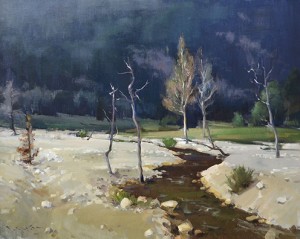